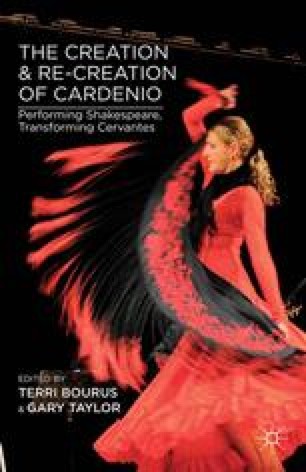 Shakespeare, Theobald, and the Prose Problem in Double Falsehood

Most critics agree that there’s not much uncontaminated Shakespearian verse in Double Falsehood. Some then leap to the conclusion that Shakespeare had nothing to do with the play. This line of reasoning assumes that dramatic prose is unimportant, or that Shakespeare’s prose is indistinguishable from anyone else’s. The following analysis seeks to explore these unsubstantiated generalizations by analyzing the unique characteristics of the prose in 1.2.179–224 of Double Falsehood. This essay is admittedly partial (36 lines, 334 words), but it provides new evidence to challenge Tiffany Stern’s 2011 claim that Double Falsehood is a forgery. An analysis of the distinctive dramatic function and vocabulary of these prose lines strongly suggests the presence of Shakespeare more than any other author. In addition, this study confronts Stern’s adamant disavowal of stylometric evidence in Double Falsehood by illuminating the methods and goals of stylometry as a reliable tool to record evidence of the play’s authorship.

Stylistic Analysis Prose Passage Early Eighteenth Century Unique Parallel Literature Online
These keywords were added by machine and not by the authors. This process is experimental and the keywords may be updated as the learning algorithm improves.
This is a preview of subscription content, log in to check access.