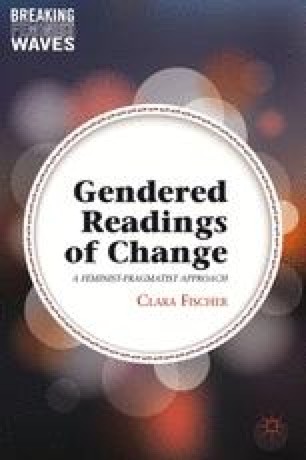 This book has provided not only a hypothetical answer to the question posed by change, but has elucidated a vision of change capable of overcoming the problematic nature of gendered (im)mutability of canonical expositions. Having established that certain early Greek themes, such as a desire to be immortal and self-sufficient (autarkeia), when coupled with misgivings about women’s sexuality and physicality, resulted in theories of change wherein women were identified by analogy with mutability or immutability, I found that woman’s traditional designation of secondary oppositional in classifications of “opposites” meant that regardless of whether change was assigned positive or negative value, woman was always contained within the latter axiological group, and therefore occupied a contradictory position within traditional male thinkers’ expositions of change. Fundamentally, woman is marked by her difference from the human, male norm, and thereby brings danger, whether this is identified as death, sexual dependency, or a life of toil.

Traditional Male Oppressive System Sexual Dependency Oppressive Norm Species Plan
These keywords were added by machine and not by the authors. This process is experimental and the keywords may be updated as the learning algorithm improves.

Whether or not indeterminateness, uncertainty, actually exists in the world is a difficult question. It is easier to think of the world as fixed, settled once for all, and man as accumulating all the uncertainty there is in his will and all the doubt there is in his intellect … we do not have to settle the question. A hypothetical answer is enough. If the world is already done and done for, if its character is entirely achieved so that its behavior is like that of a man lost in routine, then the only freedom for which man can hope is one of efficiency in overt action. But if change is genuine, if accounts are still in process of making, and if objective uncertainty is the stimulus to reflection, then variation in action, novelty and experiment, have a true meaning.