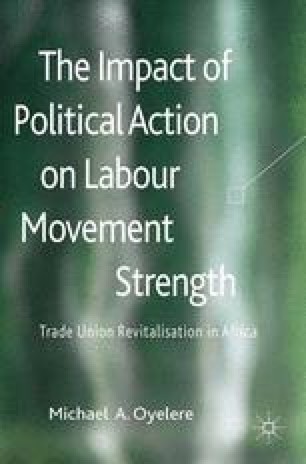 Worker organisations in both developed and emerging economies have been seen to embark on proactive action in order to counter the exigencies of the “capitalist”. With support from the ILO, many workers under military and one party despotic rule are able to mitigate the exigencies of the organisers of work. However, it is interesting that this is not a factor synonymous to emerging economies. Workers in many developed economies are faced with similar situations albeit, sometimes in a more subtle manner.In the text, I have attempted to take a wider view of trade union organisations especially from the perspective of their roles and functions within the industrial relations context by examining a number of different aspects of current situations and trying to discern future possibilities.

Political Action Social Movement Trade Union Union Membership Labour Movement
These keywords were added by machine and not by the authors. This process is experimental and the keywords may be updated as the learning algorithm improves.
This is a preview of subscription content, log in to check access.