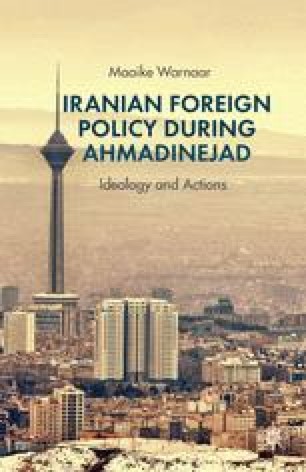 This book makes the case that one needs to take ideology seriously when studying foreign policy. Ideology, not in the sense of a false consciousness or a tool for domination, but rather a set of shared ideas among foreign policy makers. Iranian foreign policy behavior under Ahmadinejad, the topic of this book, can only be properly understood when placed in the context of regime ideology. Iranian foreign policy makers under Ahmadinejad shared the general notion that the Islamic Republic was operating in a global space in which its goals were continuously undermined by Western powers. This worldview required resistance and independence on the part of Iran, and precluded cooperation with the West on a less than equal basis. Moreover, the dominant discourse of resistance and independence facilitated the Iranian regime’s reaching out to non-Western rising and aspiring powers. Increased Western pressure on Iran during Ahmadinejad’s presidency increased and confirmed the regime’s perspective on international developments. Through its foreign policy of resistance and its efforts to increase South—South cooperation, the Iranian regime tried to use its marginalization at the hands of the West to its advantage among the non-West. Acting on the assumption that the days of United States dominance were numbered, and a multipolar system was on the horizon, the Iranian regime in a mutual effort with rising powers aimed at contributing to the very change it anticipated.

Foreign Policy Islamic Republic Iranian Regime Mutual Effort Regime Ideology
These keywords were added by machine and not by the authors. This process is experimental and the keywords may be updated as the learning algorithm improves.
This is a preview of subscription content, log in to check access.