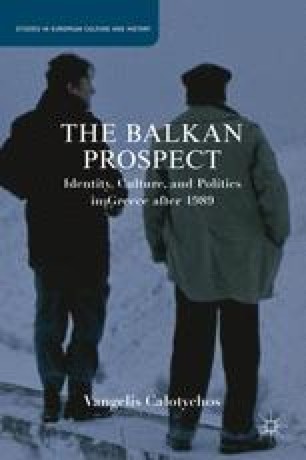 The photograph on this book’s cover is taken from the film Ulysses’ Gaze (1995) by Theodoros Angelopoulos. Its main character “A”—a name given him in the screenplay but not in the film itself—is a Greek-American filmmaker, played by Harvey Keitel. He returns to Greece after many years abroad to shoot a documentary, overcome a creative barren patch and, more importantly, to seek three missing reels of film shot by the first cinematographers in the Balkans, Miltos and Yannakis Manakis, at the beginning of the previous century. Early in his quest, at the Greek-Albanian border, Greek policemen escort busloads of despondent Albanians back home after a police sweep that is typical of this era. In the scene’s foreground, “A” crosses the border into Albania in the company of a taxi driver played by Greece’s most beloved comic actor, the late Thanassis Vengos. Unknown to an international audience, but a legend in his homeland, Vengos is acclaimed for his infectious vitality and slapstick effervescence, which are by no means traits associated with Angelopoulos’s contemplative films. Despite some serious roles late in his career, 1 Vengos’s appearance in the film adds to the incongruity of Keitel’s speech in Greek. There is an unsettling newness to this journey toward origins.

European Union European Monetary Union European Economic Community Taxi Driver Iron Curtain
These keywords were added by machine and not by the authors. This process is experimental and the keywords may be updated as the learning algorithm improves.
This is a preview of subscription content, log in to check access.