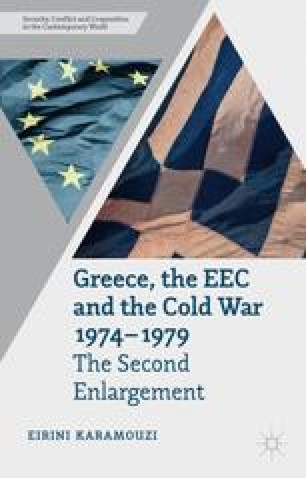 The German Presidency: The Race against Time

While progress in the first half of 1978 had been positive, the EEC/Greece negotiations had completely left out thus far the agricultural dossier and the social chapter. Now, with the Iberian applications looming, no party could risk creating a precedent in areas that were so crucial to Community budgeting. Negotiations towards the end of the year were fractious to the point of nearing breakdown, yet the crucial roles played by many actors succeeded finally in achieving agreement. The French reaffirmed their political willingness to support the Greeks; the German presidency was able to broker an agreement with the applicant and the Commission adopted a positive and fresh approach towards helping the Greek application. Finally, the Greeks now had a better understanding of the complex dynamics of internal Community bargaining. Without the convergence of all of these factors it is doubtful whether the difficult hurdles of the final months of 1978 would have been overcome.

Member State Social Affair Transitional Period Association Agreement Greek Economy
These keywords were added by machine and not by the authors. This process is experimental and the keywords may be updated as the learning algorithm improves.
This is a preview of subscription content, log in to check access.