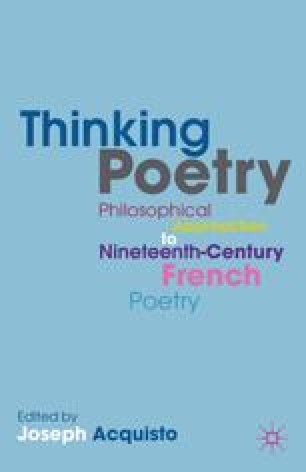 French poetry studies are at an important crossroads. While cultural studies approaches have for some time dominated the field of prose fiction, these methods have not proven as fertile in the domain of lyric poetry, where theoretical points of reference often stretch further back to the era of deconstruction. Recent years, however, have seen a renewed interest in lyric poetry among literary critics whose work intersects with philosophy. Contemporary philosophers such as Alain Badiou and Philippe Lacoue-Labarthe have made nineteenth-century poetry central to their philosophical projects in ways that suggest a potentially rich site of interaction between philosophical inquiry and poetic production. Other figures, such as Jacques Rancière and Giorgio Agamben, operate at the boundary of philosophy and political theory, again with frequent reference to poetry, while contemporary poet-critics such as Michel Deguy and Yves Bonnefoy often ground their writings on poetry in a dialogue with their nineteenth-century poetic predecessors. On the contemporary Anglo-American critical scene, the “ethical turn” in criticism that figures in work by authors such as Martha Nussbaum, Richard Eldridge, and Rita Felski invites us to examine poetry as a privileged site of expression of subjectivity and relationship to an other.

Contemporary Philosopher Philosophical Inquiry Privileged Site Philosophical Project Lyric Poetry
These keywords were added by machine and not by the authors. This process is experimental and the keywords may be updated as the learning algorithm improves.
This is a preview of subscription content, log in to check access.