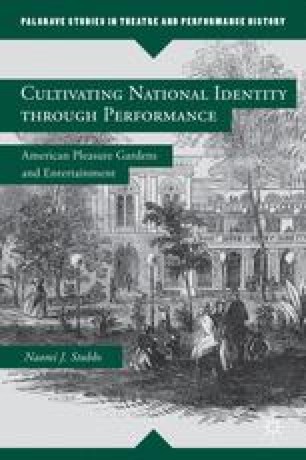 Performing Class: The Challenge to and Reaffirmation of Class Divisions and Hierarchies

On the Fourth of July 1817, playwright and politician James Nelson Barker delivered a speech in Vauxhall, Philadelphia, addressing the role of class in American society. He argued that America is not and should not be defined politically by a class structure, and refuted the need for a hierarchy in which people foist themselves to a position of superiority at the expense of those below. He knew class to be an inescapable element of American society, arguing that any civil society “will naturally divide itself into classes,” but what makes America particularly enviable, in his view, was not its lack of class divisions (“which our enemies have falsely imputed to us”) but America’s lack of a hierarchical class structure (especially on a political level).2 It was clear to Barker that democracy and the ideals important to the new nation did not mean absolute equality, but rather political equality, and that this could be gained even in a society divided into classes with different (often competing) goals. However, class conflicts and tensions were present, and they were to erupt in violence and bloodshed at the very site of Barker’s oration in Vauxhall, Philadelphia, just two years later, with a riot resulting from social exclusion leading to the destruction of the grounds. Class divisions and perceptions were not as stable or inert as Barker (and others) believed or hoped, and the site in which he stood was one of many pleasure gardens in which the limits of equality and class were tested.

National Identity Cultural Form Class Division Political Equality Elite Status
These keywords were added by machine and not by the authors. This process is experimental and the keywords may be updated as the learning algorithm improves.

People of all conditions mix in friendly, pleasing society, walk under the same magnificent arch of Heaven, and sit down in the blooming lap of maternal Nature: the rich and the poor meet in the same tranquil shade, like the oaks and willows: and the lovely free-born daughters of America, whether in silk or homespun, croud [sic] the gay parterre, like the tulips and the lilies of the valley.1

Cite this chapter as:
Stubbs N.J. (2013) Performing Class: The Challenge to and Reaffirmation of Class Divisions and Hierarchies. In: Cultivating National Identity through Performance. Palgrave Studies in Theatre and Performance History. Palgrave Macmillan, New York. https://doi.org/10.1057/9781137326874_4