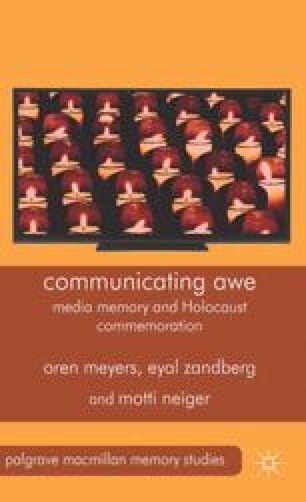 The frequent airing of solemn songs is one of the primary characteristics of Holocaust Remembrance Day and it has become one of the most identified rituals of the day.1 Hence, this chapter explores the concept of sonic memory via the investigation of popular music that constitutes the radio playlists. Holocaust Remembrance Day radio playlists can be understood as a materialized expression of the complex interrelations between memory, ideology and media practices, between national rituals and (sacred) mnemonic artefacts and objects and between cultural production and ‘mood management’. The critical analysis of Holocaust Remembrance Day radio broadcasts — both on public nationwide and commercial local stations — links all of these domains, as it considers the central role of popular radio in the process of collective recollecting, focusing on the question of what makes certain songs aired on the radio so identified with the national mourning ritual and what are the ways by which such songs gain the authority to represent and shape social memories.

Radio Station Collective Memory Radio Broadcast Cultural Object National Memory
These keywords were added by machine and not by the authors. This process is experimental and the keywords may be updated as the learning algorithm improves.
This is a preview of subscription content, log in to check access.