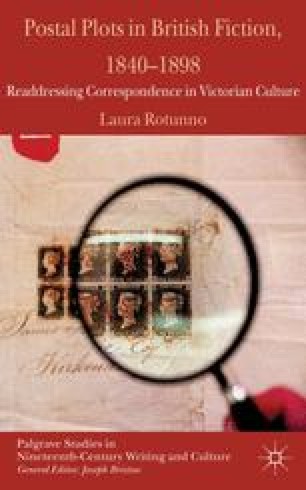 From Postmarks to Literary Professionalism in Anthony Trollope’s John Caldigate

While John Caldigate’s April 1878 to June 1879 serialization in Blackwood’s Magazine preceded the Post Office’s most publicized disgrace, the 1889 Cleveland Street scandal, by ten years, the novel met a population well acquainted with inefficient, sometimes even criminal, postal servants, with high-ranking postal officials who had been accused of misappropriating funds, and with a slew of high and low postal officers who made themselves privy to the contents of private correspondence. Anthony Trollope himself, 33-year veteran of the Post Office, openly admitted the low regard in which the public held civil servants in general. He acknowledged that many believed that government offices ‘receive their recruits’ from the ‘idle, the weak in mind, the infirm in body, the unambitious, the jolterheads, the ne’er-do-wells, the puny, and the diseased’ and that ‘in the civil service … the idle drone enjoys as much honey as the busy bee’.1 Trollope enumerated the public’s convictions: ‘that clerks in public offices did not do their work; that inefficient young men were appointed … [and that] little was done to make them … effective’.2 Into this hostile climate, Trollope’s John Caldigate introduced Samuel Bagwax: postal servant turned hero.

Civil Service Postal Servant Liberal Ideal Literary Professional Open Competition
These keywords were added by machine and not by the authors. This process is experimental and the keywords may be updated as the learning algorithm improves.
This is a preview of subscription content, log in to check access.