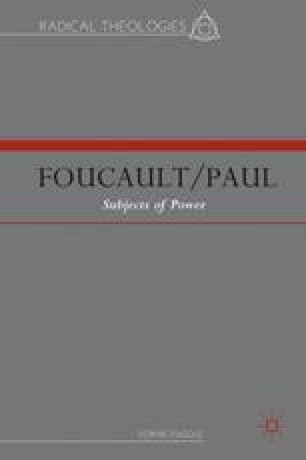 To think of power as operating in the gap or, indeed, gaps between what might conventionally be conceived as both divine and human forms of authority and the institutions, practices, and other mechanisms supporting these offers us two distinct possibilities. Is the gap something to be inhabited or something to navigate? Is it a chasm, a gaping hole, or void to be filled? Or, is it a tunnel, pathway, or thread to be followed? From weeping sores and stigmata to hairline fractures leaving imperceptible or near imperceptible scars, this chapter takes up the idea of the gap developed in chapter 3 in order to think critically about how to live and act from within it. In other words, how does Paul define and enact an ethical mode of existence within and through this space or, if you prefer, along this trajectory opened up by the Christ-event? Likewise, what is at stake in Foucault’s late work on care, governmentality, and parrhesia? What possibilities are levered open for radically alternative forms of social existence? And, finally, what might be the implications for a radical ethics that actively critiques the systems, structures, and hierarchies shaping our own sociopolitical moment?

Ethical Subject Creative Force Political Theology Homosexual Relation Pastoral Power
These keywords were added by machine and not by the authors. This process is experimental and the keywords may be updated as the learning algorithm improves.
This is a preview of subscription content, log in to check access.