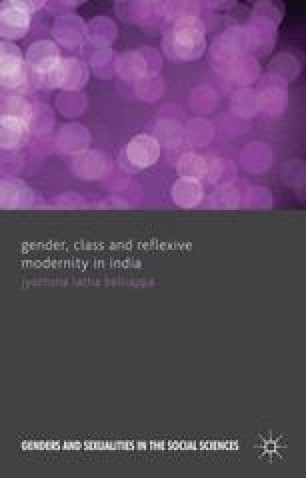 Gender, Class and Reflexive Modernity in India pp 46-67 | Cite as

As I argued in the introduction, Indian sociologists have, until recently, been wary of examining the middle classes. Sociology as a discipline has historically been identified with the concerns of the less privileged members of society, making its practitioners reluctant to turn the spotlight on a class that until recently consisted largely of the upper castes. It might also be possible that Indian sociologists have tended to overlook the sociological relevance of the class to which many of them belonged. Recently, however, sociologists have begun to recognize the influential role that the middle classes play in India, particularly in creating and strengthening dominant discourses of gender, nationhood and modernity (Deshpande, 2003; Mankekar, 1999; Fernandes, 2006; Thapan, 2004). In addition the middle classes’ emergence as a class of consumers is becoming increasingly evident as is the emergence of discourses around the idea of the new Indian (middle class) woman.

Middle Class Cultural Capital Indian Woman Lower Middle Class Middle Class Woman
These keywords were added by machine and not by the authors. This process is experimental and the keywords may be updated as the learning algorithm improves.
This is a preview of subscription content, log in to check access.