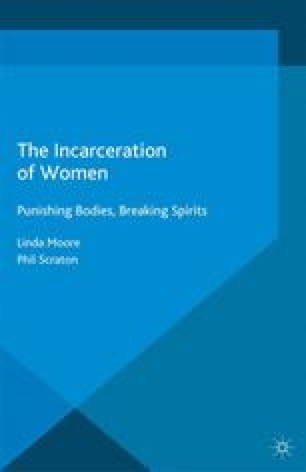 Agency, Violence and Regulation in the Incarceration of Women

They were brought from their work and other activities and lined up, silent, in rows along a wide corridor. Uniformed prison officers stood at the front and back of the lines and patrolled the corridors. The boys stood expressionless, arms to their sides. Orders were shouted by officers many of whom had the peaks of their caps pulled down over their eyes, military style. Each line in turn was instructed to move and the boys immediately went into a parade ground jog along the corridor at right angles into the canteen corridor and in through the door of the canteen. They continued the jog around the outside of the canteen peeling off to their tables where they jogged, in time, on the spot until all were in the room. On an order, shouted above the tramp of feet they stopped. Then came a further order and they sat down. The canteen was silent save for the noise of cutlery on crockery.

Total Institution Political Prisoner Incarcerate Woman Detention Centre Prison Guard
These keywords were added by machine and not by the authors. This process is experimental and the keywords may be updated as the learning algorithm improves.
This is a preview of subscription content, log in to check access.