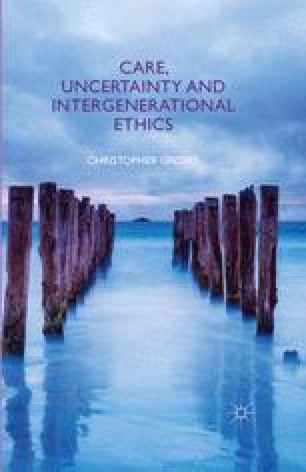 The Limits of Intergenerational Justice

Systematic discussions of intergenerational justice (IJ) are a relatively recent feature of Western moral philosophy stretching back at least to Frank P. Ramsey (1928), although brief discussions are present in the work of other figures such as David Hume and Henry Sidgwick. Outside this tradition, other cultures have produced codified considerations of what is due to future generations — as in the Iroquois constitution, which dates from the 12th century (Johansen 1995), and its commitment to what has become widely referred to as ‘seven generation thinking’. The increasing attention paid in industrialising societies to the problem of determining what we owe to the future derives largely from increasing interest in ecological concerns, population growth, resource depletion and technological risk. Despite earlier initiatives (such as species protection measures taken by the colonial powers before World War I), these concerns are mainly a product of the post-World War II period. Books from authors such as Robert Jungk (1954), Rachel Carson (2002) and Paul Ehrlich (1968) led to increased public discussion of these issues. Henrik Selin and Björn-Ola Linnér (2005) suggest that, by the 1960s, ‘the environment’ existed as a specific political field, populated by the aforementioned issues, furnished with its own concepts and associated with particular institutions. In particular, the Limits to Growth (1972) report from the Club of Rome concentrated these debates by suggesting that economic growth, which had by that time become the key indicator of social progress, might not be endless, and that economic contraction would more likely characterise an increasingly resource-poor future.

Future Generation Primary Good Aggregate Utility Future People Consumer Sovereignty
These keywords were added by machine and not by the authors. This process is experimental and the keywords may be updated as the learning algorithm improves.
This is a preview of subscription content, log in to check access.