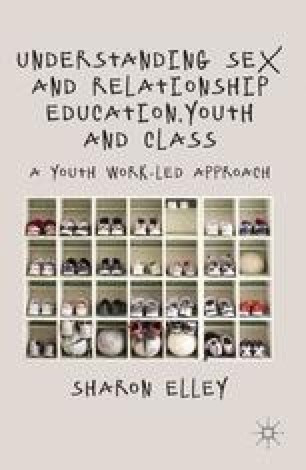 This chapter explores kinship and friendship interaction in constructing adolescent gendered heterosexual identities and practices, including communicating about sexuality and SRE. Understanding these contexts is crucial for considering how SRE messages are played out, and intimate relations and sexual identities formed. SRE interventions and policies generally claim, including the programme ‘U-Chooz’ researched here, that teens should openly communicate with parents, partners and peers about sexual issues and concerns. Research shows though that parents are often reluctant to discuss sexual matters with children because of cultural norms, their own discomfort and a lack of confidence and knowledge (UNESCO, 2009; DCSF, 2010; Parkes et al., 2010). This means adolescents reach adulthood faced with conflicting and confusing messages about gendered heterosexuality exacerbated by silence and disapproval of openly discussing sexual issues with parents, teachers and adults alike. This can result in teens’ reluctance to talk to their parents about SRE, and poor parental communication and relations have been shown to contribute to teenage pregnancy (Wellings et al., 2001; DfES, 2007b; Ofsted, 2010). This is not necessarily a conscious process as it is the inconspicuous routines and rituals of daily life which produce sexual identities across various sites.

Young People Romantic Relationship Sexual Matter Child Relationship Active Acknowledgement
These keywords were added by machine and not by the authors. This process is experimental and the keywords may be updated as the learning algorithm improves.
This is a preview of subscription content, log in to check access.

Cite this chapter as:
Elley S. (2013) Parent and Peer Communication about Sexuality and SRE in the Family and Friendship Context. In: Understanding Sex and Relationship Education, Youth and Class. Palgrave Macmillan, London. https://doi.org/10.1057/9781137316646_7