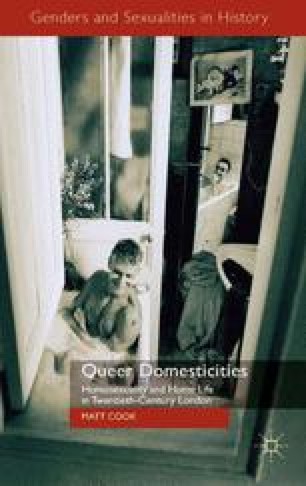 This chapter looks at the ways in which three gay men tell their stories of coming to London penniless in the 1950s and finding ‘home’ there. Their testimonies suggest ways in which the city and particular areas within it could accommodate and shape queer lives in different ways. They also suggest shared concerns about making home which relate to the social and cultural positioning of homosexual men in the postwar years. Rex Batten (b.1928) gathered his memories of the 1940s and 1950s in a fictionalised memoir, Rid England of this Plague (2006). There he describes his rural working-class upbringing and his first love affair with a middle class man called Ashley; his move to London to take up a scholarship at RADA; and his life in a bedsit in Camden, where he and his boyfriend John experienced a frightening brush with the law. I contacted Rex after reading his book and interviewed him at his current home in East Dulwich which he shared with John until his death in 1994. The novel, he told me then, was 90 per cent autobiographical.1 Alan Louis (1932–2011) got in touch with me after I advertised for project participants with older gay men’s groups in London, and I interviewed him in 2010 in the common room of his sheltered accommodation in Hackney. This for him did not feel like home and he reminisced chiefly about his ‘camp’ life in various houses in Notting Hill in the 1950s.

Family Home Domestic Life Sheltered Accommodation Basement Room Irish Labourer
These keywords were added by machine and not by the authors. This process is experimental and the keywords may be updated as the learning algorithm improves.
This is a preview of subscription content, log in to check access.