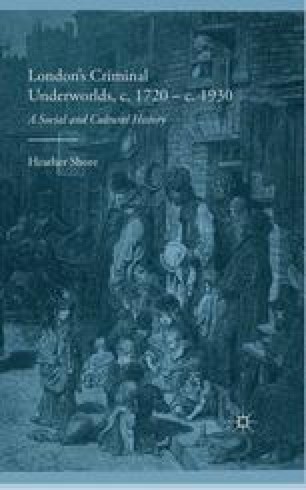 In the early nineteenth century, despite the popularity of low-life narratives such as Pierce Egan’s Life in London or the memoirs of the pick-pocket and swindler James Hardy Vaux, the taste for more traditional forms of criminal biography had waned.1 Nevertheless, late Regency and early Victorian readers’ enthusiasm for deviance was far from dead; rather it had shifted from the life-narratives of robbers and thieves to bloody spectacle. As Rosalind Crone has demonstrated, the Victorians would absorb gruesome, graphic re-enactments of violence into their mainstream print culture.2 However, whilst criminal biography may have been a moribund form, the lives of individual criminals continued to be documented in detail in early-nineteenth-century print culture as well as in the writings of reformers and other investigations into crime and poverty. Parliamentary Select Committees and inquiries into crime and policing proliferated in the early decades of the nineteenth century, with reformers, practitioners and politicians seeking tofind common ground between local and state strategies to deal with what were perceived as the increasing social costs of urbanisation and migration.3 As a result, a number of documents survive that specifically refer to individuals, public houses, police officers and crime events that can be corroborated in conjunction with court records from the Old Bailey and contemporary press reports.

Public House Juvenile Offender Criminal Network Burial Ground Crime Event
These keywords were added by machine and not by the authors. This process is experimental and the keywords may be updated as the learning algorithm improves.
This is a preview of subscription content, log in to check access.