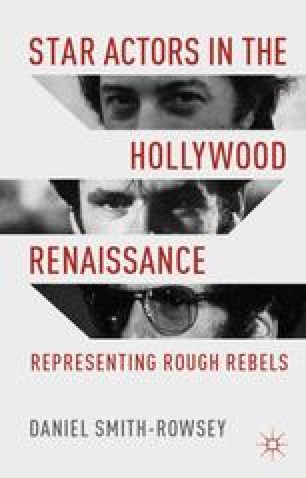 Star Actors in the Hollywood Renaissance pp 113-152 | Cite as

This chapter situates Elliott Gould’s incipient star career as an attempt to appeal to young educated adults while simultaneously maintaining and extending Hollywood traditions, much like Hoffman and Nicholson. However, Gould’s performance style considerably differed from theirs, and it was this difference that proved consequential for successive films. Gould is both a continuation of the “ethnic everyman” figure pioneered by Hoffman and something of an expansion of the type, specifically an extension that bridges gaps between Hoffman’s persona and the personas of classical-era stars. While Hoffman was understood as an exaggerated, mannered performer, Gould, by overwhelming critical consensus, was understood to be “playing himself.” (In a characteristic comment, Gould said at this time, “My secret of being a formidable actor is that I seldom act. I’m always me.”1 (emphasis his)) Under Gould, the Rough Rebel figure retained its appeal to youth and to “ironic alienation,” but expanded its parameters towards a more naturalistic acting style. Naturalism at this time was not favored in and of itself, as demonstrated by the fact that, in 1970, Gould starred in four films while the equally naturalistic Robert Redford, coming off of the smash hit Butch Cassidy and the Sundance Kid (1969), starred in none. Gould promoted a more everyman-inflected naturalism in 1969 and 1970, but by the end of 1971, curiously enough, considerably undermined it.

York Time Double Standard Star Actor Star Image Silent Majority
These keywords were added by machine and not by the authors. This process is experimental and the keywords may be updated as the learning algorithm improves.
This is a preview of subscription content, log in to check access.