Music and Performance in the Later Middle Ages 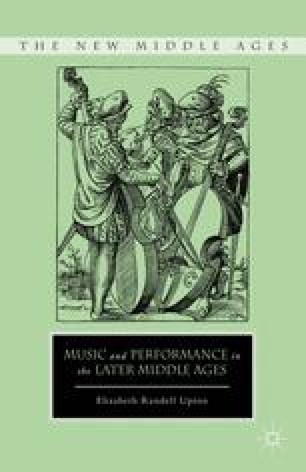 Evidence for the performance of music in the Middle Ages comes to us only indirectly. Public notices, concert reviews, and diary entries: all the familiar trappings of later public musical culture would not be invented for centuries. Only a very few mentions of music-making have been found in historical chronicles—such as the two famous examples from Du Fay’s life, the 1436 dedication of the cathedral Santa Maria del Fiore in Florence, and the 1454 Feast of the Oath of the Pheasant held by Philip the Good, Duke of Burgundy in Lille1—but such rare reports are usually too vague to be useful—“the singers sounded like angels!”—and the occasions themselves are too extraordinary, once-in-a-lifetime events for generalization to be safe.

External Evidence Musical Work Wedding Ceremony Musical Style Notational Practice
These keywords were added by machine and not by the authors. This process is experimental and the keywords may be updated as the learning algorithm improves.
This is a preview of subscription content, log in to check access.

Cite this chapter as:
Upton E.R. (2013) History and Evidence. In: Music and Performance in the Later Middle Ages. The New Middle Ages. Palgrave Macmillan, New York