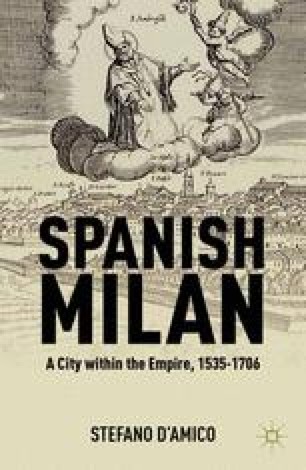 Population and the Urban Fabric
Chapter

Located in the heart of the Po Valley, the city of Milan was the center of one of the most prosperous European regions. Fertile land, advanced agricultural techniques, abundance of natural resources, and a strategic position as a bridge between Italy and northern Europe made Lombardy a highly praised region throughout the continent. Writing on the State of Milan in 1595, Giovanni Botero wondered, “Is there a Duchy more abundant in victuals, grain, rice, livestock, cheeses, wines, and flax, more replete with artificers and traffic, more densely populated, or more conveniently located?“1 The English traveler William Thomas, visiting Lombardy in 1549, wrote that “such another piece of ground for beautiful cities and towns, for goodly rivers, fields, and pastures, and for plenty of flesh, fowl, fresh-water fish, grain, wine, and fruits is not to be found again in all our familiar regions.“2 In 1611, another Englishman, Thomas Coryate, admired the countryside around Milan from the top of the city’s cathedral:

The territory of Lombardy, which I contemplated round about from this tower, was so pleasant an object to mine eyes, being replenished with such unspeakable variety of all things, both for profite and pleasure, that it seemeth to me to be the very Elysian fields, so much decantated and celebrated by the verses of Poets, or the Tempe or Paradise of the world. For it is the fairest plaine, extended about some two hundred miles in length that ever I saw, or ever shall if I should travel over the whole habitable world: insomuch that I said to my selfe that this country was fitter to be an habitation for the immortall Gods then for mortall men.3

Seventeenth Century Sixteenth Century Fifteenth Century Patrician Family Urban Fabric
These keywords were added by machine and not by the authors. This process is experimental and the keywords may be updated as the learning algorithm improves.
This is a preview of subscription content, log in to check access.