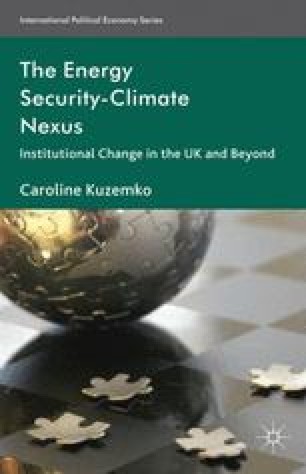 The Energy Security-Climate Nexus: UK and Beyond

At the end of Chapter 6 it was concluded that the PEPP had undergone change on every level. The question that arises at this point is whether this new system was maintained following the May elections of 2010 when a new Conservative-Liberal Democrat coalition government took office. This chapter will therefore initially explore energy policy after May 2010 in order to ascertain whether or not the new system had staying power. It would clearly be of note if a Conservative-dominated government, given the party’s historical attitudes to the role of markets in economic matters, were to continue to maintain an energy system underpinned by a narrative of market failure and the need for greater government intervention. And this is largely what occurred – even despite the re-emergence of the mantra of fiscal austerity. This is not to say, however, that no struggles emerged within policy-making circles; in fact DECC and the Treasury entered into a small war over financial support for renewable energy during this period.

Renewable Energy Climate Policy Energy Policy Political Interest Energy Security
These keywords were added by machine and not by the authors. This process is experimental and the keywords may be updated as the learning algorithm improves.
This is a preview of subscription content, log in to check access.