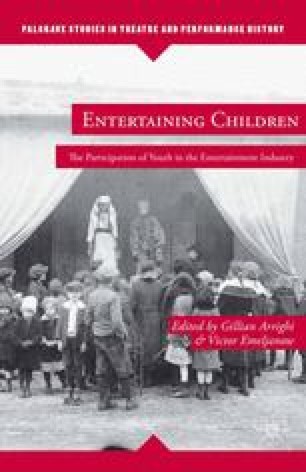 Young Mammals: The Politics and Aesthetics of Long-Term Collaboration with Children in Mammalian Diving Reflex’s The Torontonians

In 2006, Mammalian Diving Reflex, a performance company based in Toronto, Ontario, led by artistic director Darren O’Donnell (coauthor of this chapter), gained its first international success with the performance Haircuts by Children, which involved children as performers and facilitators. Haircuts was preceded by an earlier collaboration involving children, Diplomatic Immunities: Life at Age Nine (2005). Prior to this piece, Mammalian made performance by and for adults, involving variously or in combination, theater, solo performance, and “relational,”1 social, and socially engaged art practice.2 In Haircuts by Children, a group of students from grade five and six (ages 10–11 years) at Parkdale Public School were trained to cut hair, and gave free haircuts at four Toronto locations. Following its success in Toronto, the piece swiftly became (in the words of Mammalian’s website) “Canada’s most happening performance art export,”3 as the model, though not the same children, was subsequently seen in 27 cities from Los Angeles to Sydney.4

Collaborative Relationship Visible Minority Succession Plan Service Economy Shared Identity
These keywords were added by machine and not by the authors. This process is experimental and the keywords may be updated as the learning algorithm improves.
This is a preview of subscription content, log in to check access.