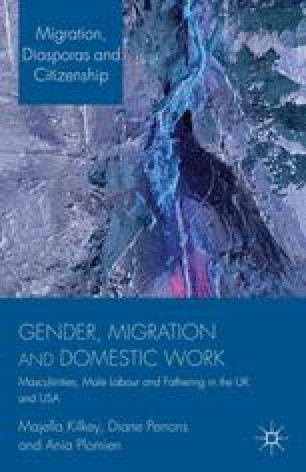 Connecting Men in the International Division of Domestic Work: The New ‘Father Time-Bind’, Global Divisions between Men and Gender Inequalities

While the supply of appropriate migrants to work as handymen and gardeners in the UK and USA represents one side of an international division in male domestic labour, demand on the part of households for commoditized male domestic services represents the other. The current chapter explores this dimension by drawing on the interviews we conducted with households that buy in help for stereotypically masculine jobs on a repeated basis in the UK, mainly in London. Pahl (1984) has argued that for any one household, the patterns and rationale of self-provisioning and outsourcing are dynamic, shifting as households move through the ‘domestic lifecycle’. We focus on just one stage of the domestic lifecycle — the childrearing phase — and within this on one type of household — those with a resident father. Such households consisting of dependent children and a resident father are among the most likely in the UK to outsource male domestic work (Kilkey and Perrons, 2010), and so represent a numerically important focus.1

Gender Inequality Parental Leave Domestic Work International Division Family Migration
These keywords were added by machine and not by the authors. This process is experimental and the keywords may be updated as the learning algorithm improves.

It’s when time becomes precious and we’ve got the kind of disposable income to pay somebody else to do it.