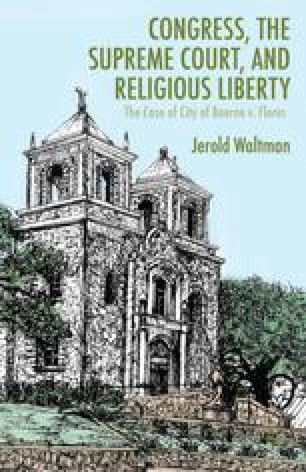 Congress, the Supreme Court, and Religious Liberty pp 1-8 | Cite as

In 1987, Anna Marie Davison, a longtime active member of St. Peter Catholic Church in Boerne, Texas, compiled one of those typical, laudatory but still highly informative, local church histories.1 She discussed in some detail the nineteenth-century founding of the church in a community that was hardly welcoming, inasmuch as the area had been initially settled by freethinking secular German immigrants. She recounted how the parish nevertheless grew, and then how in 1923 it built a beautiful new limestone church, carefully modeled on Mission Concepcion in San Antonio. Much of the work for this edifice, from hauling the stones to the construction site to putting the finishing touches on the interior, was done by the parishioners themselves. Then she brought the story up to date, pointing with pride to the fact that the parish was still growing. Her final sentence was “Who can say what is in store in the future for our parish, St. Peter’s?” Little could she have imagined a landmark Supreme Court case emerging from the church a mere decade later, or even less imagined the important role that she would play in the drama surrounding the case.

City Council Historic Preservation Building Permit Fourteenth Amendment Free Exercise
These keywords were added by machine and not by the authors. This process is experimental and the keywords may be updated as the learning algorithm improves.
This is a preview of subscription content, log in to check access.