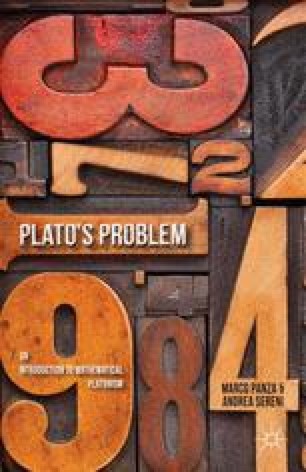 Most of the platonist strategies we have discussed so far are based on a clarification of the notion of mathematical objects. The strategy to be discussed in this and the following chapters is different, and is based on the so-called Indispensability Argument (henceforth, IA). IA is neutral on the nature of mathematical objects. It stems form the simple undeniable datum that mathematical theories are applicable, and actually applied to (empirical) science.1 Its premises are prima facie acceptable by nominalists and platonists alike, and it would offer, if sound, plausible grounds for the claims that mathematical statements are true and/or mathematical objects exist, or at least that we are justified in so believing. Not relying on its sleeves on a priori reasoning, IA is particularly suitable for supporting platonism even in an empiricist framework. IA is commonly credited to Quine and Putnam, though some precursors have been recognized in Frege, von Neumann, Carnap and Gödel.2 The basic structure of the argument is suggested in many of Quine’s remarks, for it seems to flow naturally from some of Quine’s tenets.3 However, the first explicit formulation is in Putnam (1971). As mentioned earlier, IA can be considered as a non-conservative response to Benacerraf’s dilemma, at least insofar as endorsing it is meant to imply that that the truths of mathematics are not a priori, what contradicts the second part of condition (ii) of conservative responses.

Scientific Theory Mathematical Object Ontological Commitment Indispensability Argument Semantic Realism
These keywords were added by machine and not by the authors. This process is experimental and the keywords may be updated as the learning algorithm improves.
This is a preview of subscription content, log in to check access.