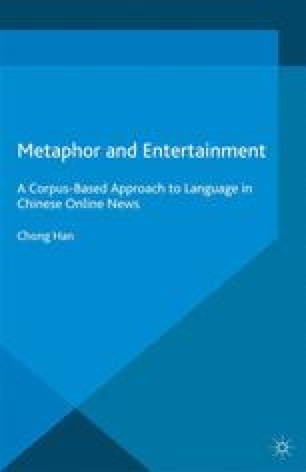 Metaphor and Creative and Playful Entertainment

While these two examples may be incomprehensible even to some Chinese readers, they will be instantly recognised by people familiar with the TV talent show Super Girl, a singing competition for female contestants organised by Hunan Satellite Television between 2004 and 2006. These examples involve the use of two metaphorical expressions, which are among the top five metaphor candidates in the keyword list, but do not occur in the Lancaster Corpus of Mandarin Chinese. These two expressions are presented in Table 6.1.

Metaphorical Expression News Text Conceptual Metaphor Theory Blended Space Conventional Metaphor
These keywords were added by machine and not by the authors. This process is experimental and the keywords may be updated as the learning algorithm improves.

‘The unexpected appearance of Kim Jeong Hoon, the main actor in the Korean soap opera Love in Palace, made ‘dry noodles’ scream madly.’