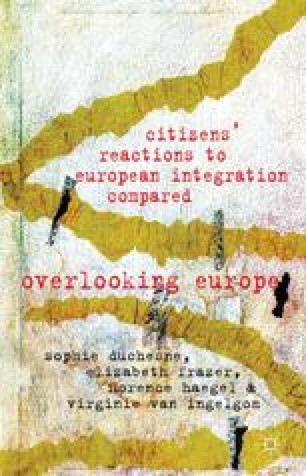 Between December 2005, when our project really began in Paris, and June 2006, when the last of our focus groups was carried out in Oxford, 411 people applied, or volunteered, to take part in our groups, and in the end 172 actually participated (including those in the groups which have been discarded from this analysis) (See Table 6.1). Since January 2006, the European Commission has probably interviewed more than 800,000 Europeans. Eurobarometer surveys are conducted in all member countries every six months. This raises some obvious questions. What justifies our spending so long on our corpus of data – even though the 133 participants in the 24 groups whose data we have analysed translate into 3,000 pages? One reason why Europe is a good topic for in-depth interview or focus group research is that a lot of stuff happens there, so citizens and other participants are frequently cued for attentiveness and opinion formation. But the stuff that has happened since the financial crisis of 2008 might be thought to be game changing – hasn’t our research effectively been made obsolete?

European Union European Level Political Life Political Identity Good Topic
These keywords were added by machine and not by the authors. This process is experimental and the keywords may be updated as the learning algorithm improves.
This is a preview of subscription content, log in to check access.