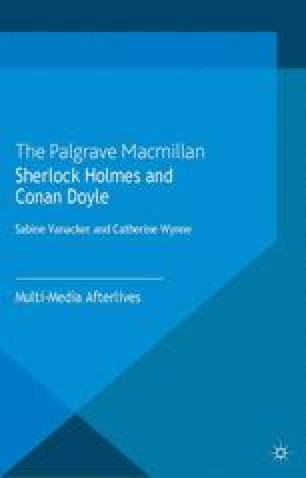 ‘Come, Watson, come! … The game is afoot. Not a word! Into your clothes and come!’ cries Sherlock Holmes in ‘The Adventure of the Abbey Grange’, first published in The Strand Magazine in September 1904 (Doyle, 1971 : 833). Within ten minutes, an enthusiastic Watson is in the cab with Holmes en route for Charing Cross Station. In the years since Doyle’s death, Holmes’s clarion call appears to have sounded for his creator as well. Numerous writers have followed the path of creating further literary adventures for Holmes, such as the collaboration between Doyle’s son Adrian and John Dickson Carr with their collection The Exploits of Sherlock Holmes (1954).1 Indeed, ‘Arthur Conan Doyle’ himself appears to have become embroiled in such adventures: in various recent detective stories, the successful author of the Sherlock Holmes canon has now, surprisingly, been transfigured into a fictionalised, sleuthing character, at the behest of various authors of historical crime fiction.

Historical Figure Detective Story Subway Train Historical Fiction Crime Story
These keywords were added by machine and not by the authors. This process is experimental and the keywords may be updated as the learning algorithm improves.
This is a preview of subscription content, log in to check access.