Protestant-Catholic Conflict from the Reformation to the Twenty-first Century 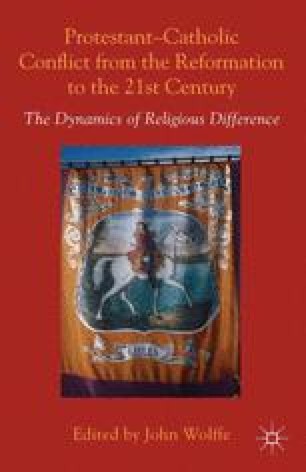 Is there a longue durée of religious conflict in modern German history? Or is it rather marked by caesura of such weight that historians must emphasize the breaks and the discontinuities in conflicts between Protestants and Catholics? Recently the distinguished historian Thomas A. Brady has argued that the ‘confessional culture of public life’ formed, if in radically changed shape, ‘the most important link between early modern and modern German histories’. He sees a ‘major strand of continuity’ in the transition from ‘an era of imperial convivencia, in which the confessions bound the Christian churches into an imperial legal and political framework, promoted discipline, and habituated themselves to coexistence’, to ‘the era of confessional rivalry and competition (1815–1918), in which the religious communities... strove to maintain or even enhance their positions in conditions of rapid political and social change’. In this transition, Brady places heavy emphasis on the great secularization of church property, completing, as he writes, ‘what the Reformation had begun’, but also bringing forth a religious revival, which was at the basis of ‘a culture of confrontation and competition’ between the major confessional groups ‘that arose with a movement toward a new Germany’.1

Territorial State German Nation Mixed Marriage Religious Revival Grand Duchy
These keywords were added by machine and not by the authors. This process is experimental and the keywords may be updated as the learning algorithm improves.
This is a preview of subscription content, log in to check access.