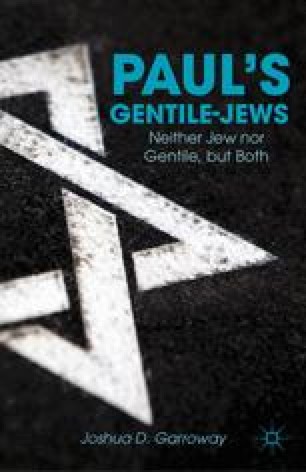 Daniel Boyarin has famously dubbed Paul a “Jewish cultural critic.” Drawing largely on the interpretive trajectory established already by James D. G. Dunn, Boyarin concluded that “Judaism, like any culture, is obviously not above or beyond criticism from within or without,” and Paul ought to be viewed as but one in a long line of Jews who have taken issue, in this case serious issue, with one or another aspect of Jewish culture.1 In Paul’s estimation, something in the normative understanding of Jewish culture was profoundly wrong and required, as Boyarin puts it, “radical reform.”2 As I suggested previously, much of my work in theorizing Christian origins is indebted to Boyarin, particularly the “wave theory” of identity he uses to understand the development of Judaism and Christianity in the second century CE and beyond and their eventual, if never complete, separation from one another.3 My perspective on Paul, too, resembles the view of Boyarin, also finding Paul to be a Jew bent on overcoming the fundamental failing in Jewish culture by rethinking some of the most basic determinants of Jewish identity. In other words, I agree wholeheartedly that Paul was a Jewish cultural critic. He did not fashion a new religion, “Christianity,” in contradistinction to an old one, “Judaism,” which he had come to find inadequate; rather, Paul refashioned the religion he knew, Judaism, in contradistinction to competing understandings of Judaism that, he believed, had not properly integrated the advent, death, and resurrection of Christ as a crucial—indeed, the crucial—component.

Olive Tree Jewish Identity Radical Reform Jewish Culture Normative Understanding
These keywords were added by machine and not by the authors. This process is experimental and the keywords may be updated as the learning algorithm improves.
This is a preview of subscription content, log in to check access.