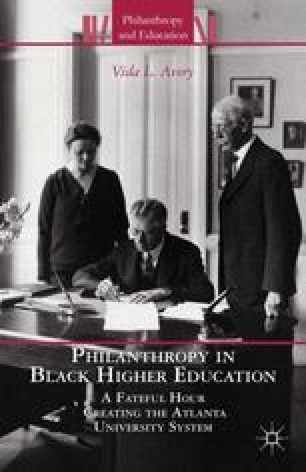 Mythical Phoenix and the Ashes It Spreads

From the end of the Civil War through the beginning of World War I, the third group of philanthropists, industrial philanthropists, emerged. More visible than missionary societies, this group was comprised of wealthy individuals, such as Andrew Carnegie (steel), J. P. Morgan (banking, later steel), Jay Gould and Cornelius Vanderbilt (railroad), John D. Rockefeller Sr. (oil), and large philanthropic foundations. The most important of the secular foundations during this time were the Peabody Education Fund, John Slater Fund, Daniel Hand Education Fund for Colored People, Julius Rosenwald Fund, Phelps-Stokes Fund, Carnegie Foundation, and General Education Board.

Rural School Black College Wealthy Individual Carnegie Foundation White Institution
These keywords were added by machine and not by the authors. This process is experimental and the keywords may be updated as the learning algorithm improves.

American colleges and universities have always been basically dependent upon philanthropy, whether private or public. In the post—Civil War years, the university could not have developed without the Cornells, Hopkinses, and Rocke fellers.