Race in Transnational and Transracial Adoption 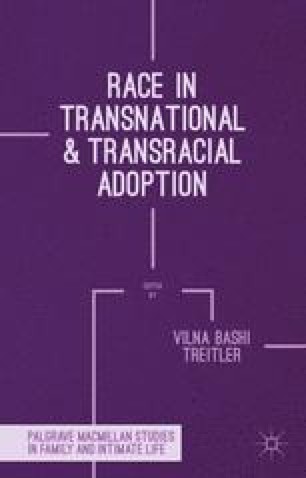 Race in Transnational and Transracial Adoption pp 190-203 | Cite as

Families are important conduits for learning about race. It is in families that many of our early notions of race and racial differences are understood (Hartigan, 1997). The literature suggests that parental transfer of racial understanding and sharing of culture are tied to particular communities, often as a response to systematic disadvantage. For example, Knight et al.’s (1993) study of cooperative orientation among Mexican American families, Dill’s (1998, 1994) study of preparatory and protective skills in African-American families, and Chao’s (1994) study of high involvement and physical closeness in Chinese immigrant families illustrate adaptations to and resistance against group disadvantage. This transmission process, referred to as racial socialization, is a means by which parents communicate racial knowledge in both subtle and deliberate ways (Hughes, 2003; Hughes et al., 2006; Hughes and Chen, 1999). While thought to be especially relevant to ethnic and racial minority parents (as structural discrimination and negative group stereotypes complicate child rearing), much less is known about the racial practices of white parents.

Adoptive Parent Racial Socialization Adopted Child White Individual White Parent
These keywords were added by machine and not by the authors. This process is experimental and the keywords may be updated as the learning algorithm improves.
This is a preview of subscription content, log in to check access.