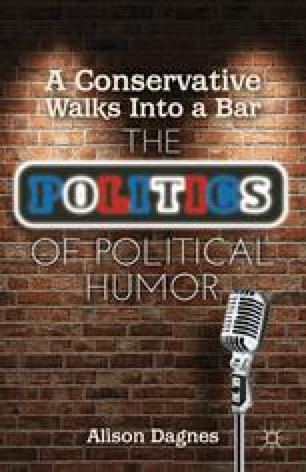 There is something about satire, the art form that combines comedy with criticism, that may attract more liberals than conservatives to its ranks. Satire is an outsider art, the weapon of the underdog who uses humor to criticize those in power. Every mode of criticism consists of varying qualities, and thus different critical forms play to the strengths of certain kinds of people. For example, talk radio is predominantly a conservative venue and liberal attempts to tap into the AM outrage have generally failed.1 Does this mean liberals cannot do talk radio? Probably not, but it does mean that liberals are more receptive to a different vehicle for criticism. So there are several qualities of satire that make it a fecund field for liberalism: its antiestablishmentarianism, its desire to take on hypocrisy as a target, and its position as the vehicle of the little guy. This chapter explores satire as an art form, examining its qualities and its necessities to distinguish it from other types of criticism. It also explores political humor to show that the driving force of this breed of criticism is humor, making the point that being funny is more important than being “right.” This helps to distinguish the satirist from the advocate, the comedian from the activist.

Confirmation Bias Party Affiliation Happy Ending Daily Show Fair Game
These keywords were added by machine and not by the authors. This process is experimental and the keywords may be updated as the learning algorithm improves.
This is a preview of subscription content, log in to check access.