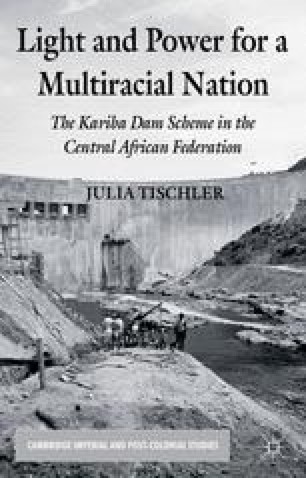 Intervening in the Kariba Dam Project

Despite the serious problems they encountered, British officers felt certain about one constant in the course of the resettlement: the loyalty of the Gwembe Tonga Native Authority (GTNA). Numerous reports hailed the steadfast co-operation of the seven Gwembe chiefs and the councillors,1 who functioned as the ‘traditional’ representatives of the people in the colonial system and as such carried great responsibility for the resettlement. In particular, chief councillor Hezekiah Habanyama2 seems to have been a perfect comprador, an obedient local agent of the colonial power, if one believes the British officers’ songs of praise. On closer inspection, however, a more complicated picture emerges. As a mediator between the Gwembe Tonga and the overburdened District Officers (DOs), the GTNA’s standing vis-à-vis the British administration was, on the one hand, significantly enhanced. On the other, the evictions undermined the Native Authority’s moral authority among the people, as Habanyama’s daughter remembers: ‘My father […] was the one who had to persuade the people to move. So that made him unpopular.’3 Moreover, as much as it was a salaried mouthpiece of the colonial government, the GTNA also used its position at the operational centre of indirect rule in order to leave its own mark upon the district’s transformation.4

Labour Party Colonial Government Resettlement Programme Colonial Authority Resettlement Area
These keywords were added by machine and not by the authors. This process is experimental and the keywords may be updated as the learning algorithm improves.
This is a preview of subscription content, log in to check access.

Cite this chapter as:
Tischler J. (2013) Intervening in the Kariba Dam Project. In: Light and Power for a Multiracial Nation. Cambridge Imperial and Post-Colonial Studies Series. Palgrave Macmillan, London. https://doi.org/10.1057/9781137268778_4