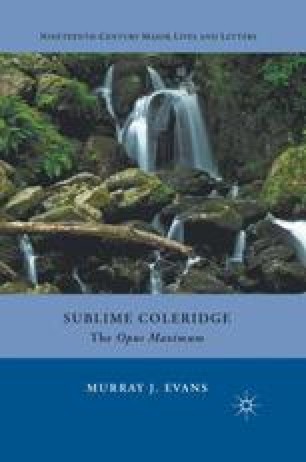 Reading “Will”: A Primer for the Opus Maximum

“Chapter III” is the first extant chapter of the Opus Maximum (OM), which begins VCL MS 29, vol. iii, McFarland’s Fragment 1.1 At the end of this chapter, Coleridge defines his first assumption or “postulate” for the whole argument of OM as “the Existence of the Will” (Op Max 11). To understand Will is a prerequisite for understanding OM. But the definition of Will at the end of Chapter III is not very clear; and the whole chapter leading up to the definition can be a nightmare for any reader with ambitions to read through OM. The content is challenging enough, but the rhetoric of Coleridge’s argument complicates the matter. Part of the problem is what Heather Jackson acutely describes as Coleridge’s “art of suppressed or concealed transition”: his freer adaptation of the rhetorical figure transitio “that explicitly signals the passing from one subject to another.” Jackson believes that scholars’ neglect of transition is serious, since it is the technique that manifests Coleridge’s “method.” She suggests that his transitions “belong not to the literal content of a text but to its conceptual structure, not to its diction but to its syntax, not to its parts but to the unarticulated relationship between the parts” (Jackson 217, 214, 218–20).

Moral Responsibility Opus Maximum Middle Term Chapter Versus Positive Proof
These keywords were added by machine and not by the authors. This process is experimental and the keywords may be updated as the learning algorithm improves.
This is a preview of subscription content, log in to check access.