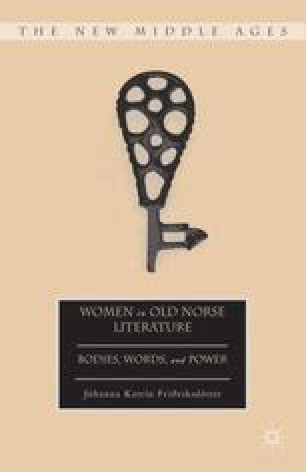 The previous chapter showed how in the Íslendingasögur the fantasy of being able to employ magic was used productively to engage with questions of female agency. The fornaldarsögur are even more inclined to employ fantastic and supernatural elements: mythical creatures such as dragons, animal-human hybrids, and giants appear throughout the corpus. Magical objects, weapons and clothes, enchantments, shape-shifting, and heroes’ superhuman strength, skill, and longevity abound. Although these sagas may at times seem to be a never-ending procession of battles on sea and land between men, encounters with giantesses feature prominently in several of them. These female characters appear in many forms, ranging from threatening creatures who are swiftly and brutally exterminated to benign figures providing various sorts of help to the young male hero, including sexual favors, material (and sometimes magical) objects, and advice. Giantesses are often encountered away from the hero’s home territory and civilization on their exploits in search of adventures and plunder, in the far North or East, principally imagined spaces where different rules apply from those of the human world. There has been significant critical discussion about the giant races in Old Norse myth, and how female giants commonly appear as sexual partners and even wives of the gods, but scholars have paid relatively little attention to their counterparts in the fornaldarsögur.1

Sexual Partner Female Character Aggressive Sexuality Medieval Literature Male Protagonist
These keywords were added by machine and not by the authors. This process is experimental and the keywords may be updated as the learning algorithm improves.
This is a preview of subscription content, log in to check access.