Social Change and Education in Greece 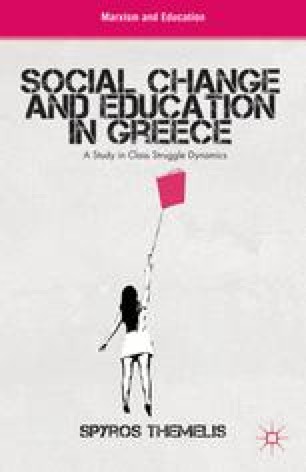 Social Change and Education in Greece pp 1-10 | Cite as

On the last day of primary school, Phokion and Theophilos bid farewell to the 40-pupil strong class, received their graduation certificates, and went home. That evening, they both went to the crops to give a hand to their families. This is early 1960s during harvest time, a labor-intensive period for almost everyone in our little provincial town, which I henceforth refer to as Protopi. That day was the last time Phokion and Theophilos saw each other at school. In September, Phokion moved out of Protopi to study in the nearby city, which was in geographical proximity though it felt like worlds apart in almost every other aspect. Phokion’s family had the financial ability to hire landworkers and hence release their son from agricultural duties so that he could advance his academic career. Phokion made the most of it. He completed both lower and upper tiers of secondary school and was one of the first in his generation to enter university and become a teacher. In the late 2000s, he told me that he was looking forward to him retiring in the next few years. Both his children were university graduates, which was enough to make Phokion proud, though not sufficient to give him peace of mind. Unemployment is very high and rising among graduates, albeit Phokion was optimistic that “they will find their way.” For Phokion, education became the catalyst for a life that was considerably better than his parents’. He achieved all that people of previous generations could not.

Labor Market Social Mobility Liberal Democracy Greek Version Educational Expansion
These keywords were added by machine and not by the authors. This process is experimental and the keywords may be updated as the learning algorithm improves.
This is a preview of subscription content, log in to check access.