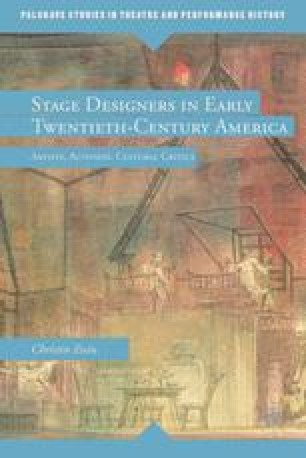 The Designer as Author

Robert Edmond Jones’s collected papers at the Harvard Theatre Collection include numerous drafts of lectures he developed on practices of stage design and the state of the contemporary American theatre. In 1940, Jones traveled the country on a lecture circuit, speaking to students at a number of colleges and universities about his professional experiences and, more significantly, his projections for a future theatre that would capture the modern spirit of the nation.1 While many of his colleagues had by then left the theatre for lucrative opportunities in film or industrial design, Jones remained dedicated to an idealized vision of the American theatre, one that might still emerge from the hands of the next generation. He urged his audiences to create a “new and vital form of theatrical expression” that connected with contemporary spectators.2 What the modern theatre needed most were young artists with a “dramatic imagination,” the ability to help spectators see more beauty in the mind’s eye than on the literal stage, to lift them to a place of poetic contemplation and heightened awareness. Jones published a compilation of his lectures in The Dramatic Imagination (1941) in which he directly hailed young artists as his principle readership. He encouraged them to “take the little gift we have into the hall of the gods,” to use the stage to realize an American theatre that embodied the spirit of modern living.3

Modern Theatre Design Profession Future Theatre Production Photograph Aesthetic Theory
These keywords were added by machine and not by the authors. This process is experimental and the keywords may be updated as the learning algorithm improves.
This is a preview of subscription content, log in to check access.