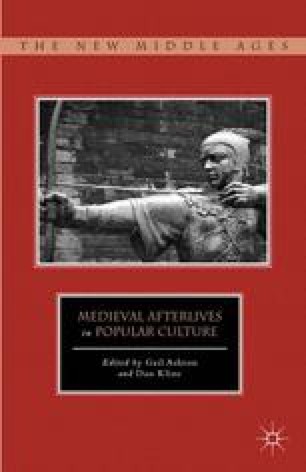 Time Travel, Pulp Fictions, and Changing Attitudes Toward the Middle Ages: Why You Can’t Get Renaissance on Somebody’s Ass

My point in this essay is that popular usage no longer despises the Middle Ages, and that, ironically, academic medievalists have been slow to see the change because we still have a stake in the Renaissance model of the world that created the superior attitude. Several years ago, I argued that American popular images of the Middle Ages were a kind of temporal Orientalism: in fiction, film, news reporting, advertising, and political cant, the period became a dumping ground for the modern Western world’s repressed evils (barbarism, torture, disease, and general chaos) and daydreams (exotic adventure, romance, honor, the simple life).2 The images were familiar: on one side (the evils), network news references to “medieval” places like Afghanistan, with their warlords and their unpaved towns and religions, or the simple youth dismissal, “that’s so medieval,” of anything built, done, written, or thought before 1980; on the other side (the daydreams), the greening of community and the Disneyfication of King Arthur. Images of violence and dirt far outnumbered images of honor and greenery, however, and clean, clear air was rarely called medieval; fictional treatment of the period always dwelled on the smelliness of the place.

Time Travel Modern World Source Text Fourteenth Century Theme Park
These keywords were added by machine and not by the authors. This process is experimental and the keywords may be updated as the learning algorithm improves.

There’s a lot of moral ambiguity goin’ on around here.