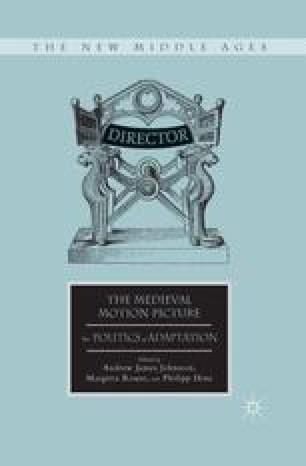 Otherness Redoubled and Refracted: Intercultural Dialogues in The Thirteenth Warrior

Portrayed as darkly savage or brightly innocent, the cinematic Middle Ages have long operated as a mirror highlighting both modernity’s advances and its failings. Frequently, this ambivalence is mitigated by the notion of an unchangeable human “nature”—such as the longing for love and freedom or an innate morality—hidden beneath the historical costumes.1 The dialogue between periods that each medieval movie initiates is thus often trapped in a dichotomous pattern. Some films celebrate emancipated enlightenment vis-à-vis brutal medieval primitivism, others paint a romantic image of medieval artlessness and integrity in stark contrast with modern decadence and alienation. Since these films juxtapose familiarity and otherness to allow for both recognition and dissociation, the degree of medieval alterity a given film is willing to tolerate necessarily depends on the categories supposedly defining modern identity. As a bottom line, the medieval Other often presents contemporary viewers with a suitably recognizable mirror image: a rough stranger nonetheless conforming to our standards of identity.

World View Historical Difference Intercultural Dialogue Muslim Faith Funeral Ceremony
These keywords were added by machine and not by the authors. This process is experimental and the keywords may be updated as the learning algorithm improves.
This is a preview of subscription content, log in to check access.