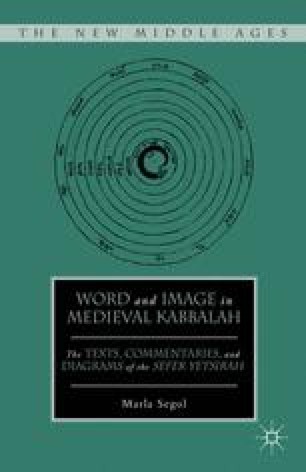 The Letter forms: How Did He Combine Them?

This chapter explores the function of the letterforms in the Sefer Yetsirah (SY). As discussed in the previous chapters, letter combination performs a practical function in the SY. They are the building blocks of creation, used by both human and divine actors. The SY situates the powers of the letters both in the divine and in astrological forces, so that letter combination acts upon God and the cosmos at large. The primary texts vary in crucial details, so they tell different stories about the significance of the act; for human operators, letter combination earns divine favor, salvific knowledge, and/or prophecy. Yet the text does not explain well why or how this works, or the role of astrological forces in the efficacy of letter combination. As such, this chapter aims to better understand the nature of the letters, the source of their power, and their intended application by examining the texts of the SY, relevant Biblical and postbiblical scriptural literature, and the early commentaries on the work.

Human Operator Human Language Letter Combination Divine Action Human Destiny
These keywords were added by machine and not by the authors. This process is experimental and the keywords may be updated as the learning algorithm improves.
This is a preview of subscription content, log in to check access.