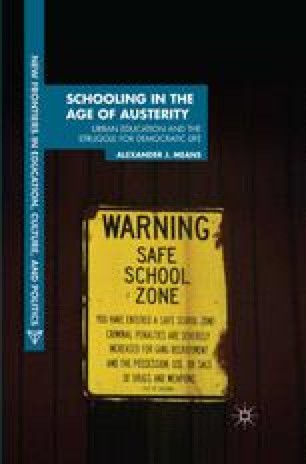 September 11, 2001 and the financial crisis of 2008 mark two transformative moments in the politics of security in the United States. On one hand, the terrorist attacks on the World Trade Center and the Pentagon on 9/11 ushered in a stunning expansion of state security. We saw this in the passage of the USA Patriot Act; the creation of the Department of Homeland Security; the pursuit of the global War on Terrorism in Iraq, Afghanistan, and beyond; and the diversion of trillions of public dollars into the war industry and projects of domestic surveillance and policing. On the other hand, ongoing instabilities in global capitalism and continued fallout from the 2008 economic crisis have made visible a stark erosion of social and material security in contemporary life. While Wall Street and the corporate sector have resumed minting new billionaires and posting record profits (the top 1% now has a higher net worth than the bottom 90%), millions have been left with foreclosed homes, debilitating debt, vanishing jobs, and stagnating wages. Concurrently, a regressive politics of disinvestment and austerity continues to hollow-out commitments to public infrastructure, health care, child development, education, and labor and environmental protections further eroding the basis for securing human well-being and the future.

Public School Child Poverty Crime Control Charter School Human Security
These keywords were added by machine and not by the authors. This process is experimental and the keywords may be updated as the learning algorithm improves.

Security reasoning entails an essential risk. A state which has security as its only task and source of legitimacy is a fragile organism; it can always be provoked by terrorism to turn itself terroristic…Nothing is therefore more important than a revision of the concept of security as the basic principle of state politics.