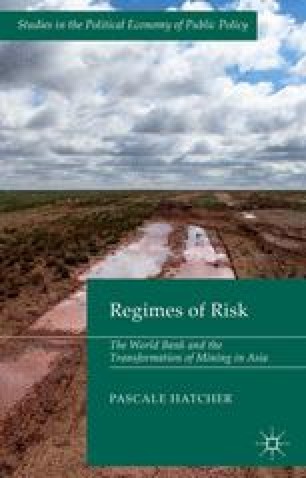 This book has followed the World Bank Group (WBG) in its attempt to entice foreign investments in Asia’s mining sector. While it readily speaks to cases in Africa and Latin America, the analysis for this book has been built on the region of Asia, a continent which has been largely ignored by scholars, despite its proven abundance of mineral reserves and despite having resource-hungry China and India in its midst. The mining sector of the three countries selected as case studies for this book, the Philippines, Laos and Mongolia, greatly differ from one to the other. The Philippines has a long and controversial history of large-scale mining activities, while Laos, which until a little more than a decade ago had almost seen no large-scale mining activities, is now furiously tapping into its newly discovered abundance of natural resources. Like Laos, Mongolia is only now resolutely turning its economy towards the extractive industry. However, Mongolia’s uniqueness lies in the sheer scale of the mines that are now being developed in the heart of the Gobi: Oyu Tolgoi is the world’s third-largest copper and gold mine and the Tavan Tolgoi project is to be the world’s largest coal mine. While disparate in terms of their economies, their political systems, and their history of mining activities, the three countries have one fundamental commonality: the significant role that has been played by the WBG in the development of their mining sector.

Mining Activity Foreign Investment Political Risk Mining Sector Extractive Industry
These keywords were added by machine and not by the authors. This process is experimental and the keywords may be updated as the learning algorithm improves.

‘Lack of state capacity, unequal constellations of power, and the absence of developmental economic and social policies impede the potential of mineral rents’