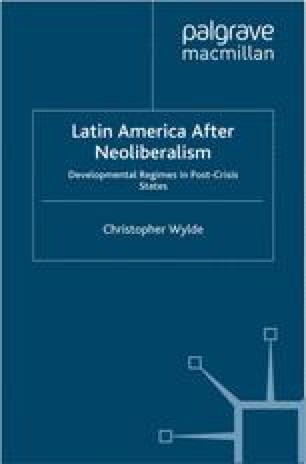 Introduction: The Political Economy of Development and Crisis

In an article in 2004 William Robinson wrote that in the early twentyfirst century global capitalism was in crisis, based on the twin edifices of a structural crisis of overaccumulation and a subjective crisis of legitimacy (Robinson, 2004). The attacks on the twin towers in New York had given capitalist globalisation a ‘new and terrifying coercive dimension’ and the ‘new war order’ emerging from this was only going to aggravate the dimensions of this crisis (Robinson, 2004: 150). What Robinson could not have known in 2004 was that this perceived crisis in the periphery would be superseded by an even larger crisis of the neoliberal model of accumulation in the core in 2007 — tentatively labelled ‘The Great Recession’.

Political Economy Capital Accumulation Global Financial Crisis Credit Crunch Future Research Agenda
These keywords were added by machine and not by the authors. This process is experimental and the keywords may be updated as the learning algorithm improves.
This is a preview of subscription content, log in to check access.