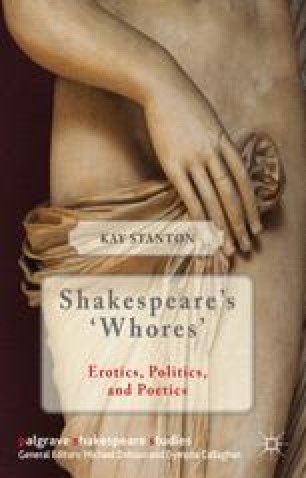 In As You Like It, Orlando, in one of his poems, briefly compares Rosalind, his beloved, to Cleopatra, among other models of female excellence. In his poetic fancy, ‘heaven Nature charged / That one body should be filled / With all graces wide-enlarged’, so ‘Nature presently distilled / Helen’s cheek, but not her heart, / Cleopatra’s majesty, / Atalanta’s better part’, and ‘Sad Lucretia’s modesty’ (III. ii. 139–45). Upon reading this poem, Rosalind, in male disguise as Ganymede, describes it to Celia as a ‘tedious homily of love’ (II. ii. 153–4), and when she encounters him, still disguised, later in this scene, she will begin to disabuse him of his tendency to love his projected image of his lady-love rather than a flesh-and-blood person, but in some sense Orlando was right in his comparison: Rosalind is the female character in Shakespeare’s comedies who, I believe, comes closest to achieving the ‘majesty’ of Cleopatra’s passion as well as her androgyny, making her the most successful among the comedies’ women in her quest for sex as she would like it.

Double Standard Female Character Patriarchal Society Double Sexual Standard Heterosexual Marriage
These keywords were added by machine and not by the authors. This process is experimental and the keywords may be updated as the learning algorithm improves.
This is a preview of subscription content, log in to check access.