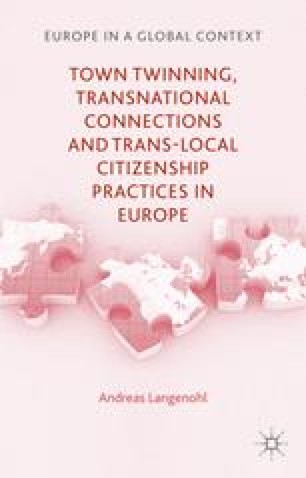 Conclusion: Town Twinning and the Ethics of Exchange

The current motto of the German Academic Exchange Service, whose aim it is to send German students and scholars abroad and to support foreign students and scholars who wish to study and work in Germany, reads ‘Change through Exchange’ (Wandel durch Austausch). This motto could serve as a shorthand characterization of the ethics of the town twinning movement in Europe ever since it began. While the historiography of twinning in Europe after the Second World War has stressed the importance of reconciliation that was present at the very beginning of the movement, town twinning practice implied that exchange as such merits an especial worth in achieving reconciliation and political cooperation. This ethics of exchange has also carried town twinning through its successive stages, having been called upon to foster the integration and mutual interpenetration of nation-states in Europe; to support ‘municipal foreign policy’; to strengthen transnational ties; and, most recently, to anchor the European polity and its various projects in the hearts and minds of its citizens. To draw some final conclusions from the present book, which has been less concerned with the official agendas of town twinning than with the social and cultural practices that are its substrate, I want to now dissect the different dimensions of the ethics of exchange implied in those practices, with a particular focus on the current state of the European Union (EU), and its advocacy of town twinning.

European Union Market Exchange German Academic Exchange Youth Exchange European Polity
These keywords were added by machine and not by the authors. This process is experimental and the keywords may be updated as the learning algorithm improves.
This is a preview of subscription content, log in to check access.

Cite this chapter as:
Langenohl A. (2015) Conclusion: Town Twinning and the Ethics of Exchange. In: Town Twinning, Transnational Connections, and Trans-local Citizenship Practices in Europe. Europe in a Global Context. Palgrave Macmillan, London