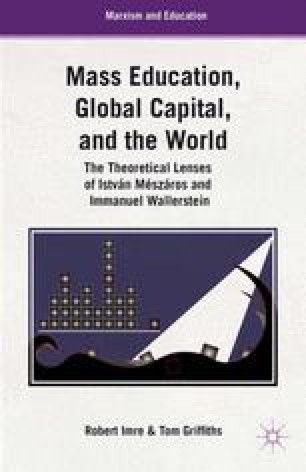 Mass Education, Global Capital, and the World pp 11-39 | Cite as

Almost four decades ago, the first edition of Volume I of Immanuel Wallerstein’s The Modern World-System was published (Wallerstein: 1974a). In 2011, new editions of volumes I, II, and III were published, along with the long-anticipated fourth volume, The Modern 1789–1914. A fifth and sixth volume are scheduled, if the author can “last it out” to cover the “long twentieth century,” which will include treatment of the underlying premise of Wallerstein’s extensive corpus of work—the structural crisis of the capitalist world-economy (Wallerstein: 2011b, xvii). World-systems analysis (WSA) has from the outset developed a macro- level account of social reality, offering an explanatory framework centered on the historical establishment and development of the capitalist world-economy, and its current and future trajectories. On the question of grand narratives, Wallerstein (2011a, xxiii) remains steadfast in presenting WSA as an “alternative master narrative…[to]…the orthodox Marxist and modernization master narratives,” asserting, “We refused to throw out the baby with the bathwater.”1

Core Zone French Revolution Capitalist World Commodity Chain Multiple Polity
These keywords were added by machine and not by the authors. This process is experimental and the keywords may be updated as the learning algorithm improves.

But obtaining power within a sovereign state that is constrained by an interstate system based on a functioning division of labor has not meant, probably could not have meant, the ability to opt out of the capitalist world-economy. It has meant instead the ability to achieve some limited reallocation of world surplus, in short, the power to bring about reforms, without necessarily undermining the system as such.