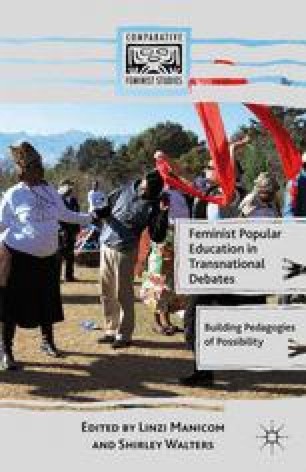 Indigenous scholar/activist Sandy Grande is concerned with education as an emancipatory force and seeks to create a red pedagogy1 that depends on mutual learning and collaboration among Indigenous and non-Indigenous peoples. As Grande (2004, 8) says: “To know ourselves as revolutionary agents is more than an act of understanding who we are. It is the act of reinventing ourselves, of validating our overlapping cultural identifications and relating them to the materiality of social life and power relations.” Grande’s message was published in the same year that two women—Audrey Huntley, an activist and documentary filmmaker of mixed Indigenous/Euro-immigrant ancestry, and Barbara Williams, a feminist educator and ally with European ancestry—created No More Silence (NMS). This is a Toronto-based group dedicated to eradicating violence against Indigenous women on Turtle Island (North America). NMS’s mandate includes raising awareness about the impunity of state actors (the police, justice system, and coroner’s office) in the 582 cases of missing and murdered Indigenous women and girls across Canada identified by the Native Women’s Association of Canada as of March 31, 2010 (NWAC 2010, i). Like Grande, NMS cofounders were committed to working collectively to decolonize the relationships between diverse women engaged in solidarity work; we call it the praxis of decolonizing solidarity.

Indigenous People White People Radical Politics Indigenous Woman White Privilege
These keywords were added by machine and not by the authors. This process is experimental and the keywords may be updated as the learning algorithm improves.
This is a preview of subscription content, log in to check access.