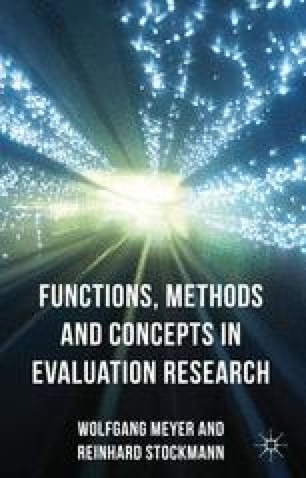 Functions, Methods and Concepts in Evaluation Research pp 8-53 | Cite as

The Role of Evaluation in Society

Modern societies are characterized by the replacement of traditionally and religiously determined beliefs regarding the world order by faith in rationality and progress. As early as the end of the 1960s, Daniel Lerner (1968: 387) produced an incisive summary of the features of modernity: they include a growing, self-sufficient economy; democratic participation in the political sector; a culture which orients itself toward secular, rational norms; a society that is performance-oriented, equipped with personal freedom, and is spatially, socially and intellectually mobile. Connected with this construct is the idea that modernity is a universal phenomenon, and that it can be shaped and governed (cf. for example Degele & Dries 2005; Hill 2001 for introductions). But that is not all: in view of the social, economic and ecological problems which accompany modernity and have noticeably come to a head in recent years, the idea has meanwhile established itself that social development is by no means a thing that will simply look after itself, but urgently needs to be steered resolutely toward ‘sustainable development’ (cf. Federal Government 2001).

Evaluation Research Evaluation Capacity Advanced Training Reform Programme Development Cooperation
These keywords were added by machine and not by the authors. This process is experimental and the keywords may be updated as the learning algorithm improves.
This is a preview of subscription content, log in to check access.