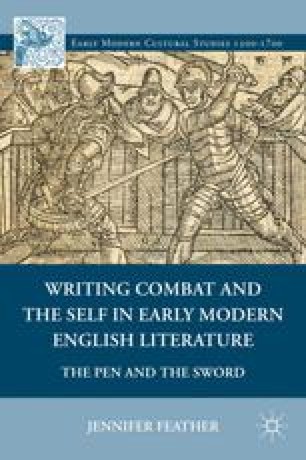 Conclusion: “Hunt Honour, and not Nations with Your Swords”

These two distinct attitudes toward boxing epitomize two possible responses not only to “the sweet science” but to early modern depictions of combat. On the one hand, boxing is brutal and uncivilized, and hence, by definition, destructive rather than constructive; on the other hand, it is deeply implicated in the construction of self. The tension between these two visions of combat runs throughout our readings of early modern texts. Embracing an idea of the early modern period as distinct from the recent medieval past because of the rise of humanism and the curbing of interpersonal violence, we find most puzzling what seems to be an early modern fixation on gruesome scenes of dismemberment. Even in the relatively sanitized realm of anatomy, a taste for bloodshed seems to haunt our vision of early modern enlightenment. Both early modern writers and later critics have displaced this fascination with combat onto the barbaric, the savage, the feminine, and the medieval. However, we ignore the central significance of early modern combat at our peril. Our discomfort with what seems to be a passion for destruction blinds us to the constructive place of violence in early modern texts and causes us to reify a narrative of historical change that always favors the victor and marginalizes the victim.

Early Modern Period British Difference Gender Distinction Love Object Bodily Difference
These keywords were added by machine and not by the authors. This process is experimental and the keywords may be updated as the learning algorithm improves.

Boxing hurts people, disables people, and kills people; none of this can be rationalized or hidden, and there is no humane way to refute anyone who thinks that these facts should outweigh all the others.

[Boxing] is an act of consummate self-determination—the constant reestablishment of the parameters of one’s own being.